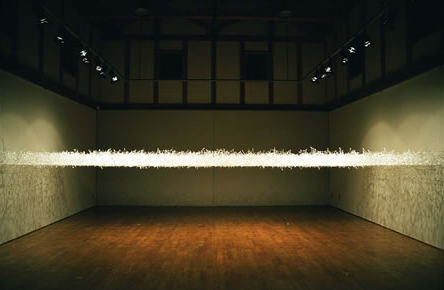 Colllective Unconscious
:The Uncoscious mind area which all the mankind has in our deep bottom where keeps every impessions of actions and thoughts.

I received the invitation of this exhibition two years ago, and until now I experienced an unexpected matter. That is my mother’s death. For everybody, mother might be the dearest being, but I thought it should be special for my case. What happened to my precious mother who lived with pure heart ? Why God or Buddha couldn’t save her ?
I talked to myself many times and I struggled without any answer.

Seeing her at the hospital, I concerned her weak breathing day and night. I was occupied with deep grief and anger to somethig what I don’t know clearly. However, one midnight at the bed side, I suddenly noticed that I was suffered from myself. My grief, my anger, my anxiety, my repentance, all of them are my belongings, aren’t they ?

Though I was upsetting like that, my mother herself was quite calm, without tears, shouts or anger, even after the notice of her cancer. I’ve learned from my mother that
I shoud accept any matters as it is which occured around me. She seemed like saying that something great looking at me anytime, so I should trust it.

I thought that I need belief and resolution. They are after all, the promise with myself without any assurance, aren’t they ? The Bible says “Unless a grain of wheat falls into the earth and dies, it remains by itself alone. But if it dies, it bears much fruit.”(The Good News according to John 12:24) I read this phrase by quotation on the book by an Japanese Zen master named Sokou Morinaga. That phrase often encourage me and tell me to be resolute and to study more about everything.

The exhibition was held around the first anniversary of my mother’s death. I promised to my mother to start again from the first step by this work. So that the figure looks like our Chinese charactor”1″. This might be a compensation for my mother. I wish all of her emotions at the last period of her life could be purified in the warm light like this work, together with my emotions at that time.